Seattle was very lucky to have a mayor that rides a bike.
We think all city employees should ride bikes! Perhaps then when they decide to build, say a tunnel, they will include a bike path.
Imagine an I-90 style bike tunnel under downtown, out of the rain!

Former Mayor Nickels on a Bike! 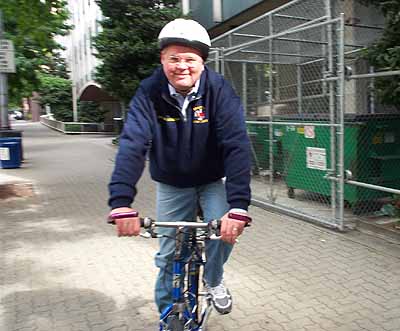 The staff at Aaron's Bicycle Repair, Inc. is actively involved in bike advocacy. We attend meetings and write letters to the editor and post on forums to help make cycling better. We notify the city when bike paths need sweeping or fixing (We were instrumental in getting the new Sylvan Way SW bike path finished!). We lobby the city with ideas for bike lane improvements.

On Saturday, September 7th, 2002 Aaron took Mayor Greg Nickels on a bike tour of the route from West Seattle to downtown.
I showed him the good, the bad and the UGLY!
After the ride, I followed up with an email and pictures of the problem areas. Some spots actually got fixed right away! Most problems for bikes are just maintenance related and get missed unless someone reports them.

National Center for Bicycling and Walking